This is something I have been waiting desperately for! When I first received the ARC of Orlind, I wanted to know what the cover was going to look like. Each book in Charlotte’s series has had remarkably wonderful, eye-catching covers.  The art work is simply mesmerizing on each of them. When I heard that the cover would not be ready for quite some time, I was hugely disappointed. I kept pestering Charlotte for updates which she did not really have.

Well, the wait is finally over! Today, I get to reveal the fantastic cover for the third and final book in the Draykon Series!

The cover depicts one of the seminal points in the story, where Llandry and Pensould are fighting the war, on the side of the humans. I won’t say more as I do not want to give away a MAJOR plot point. I think you should just go ahead and read this amazing series if you want to know more! 😛 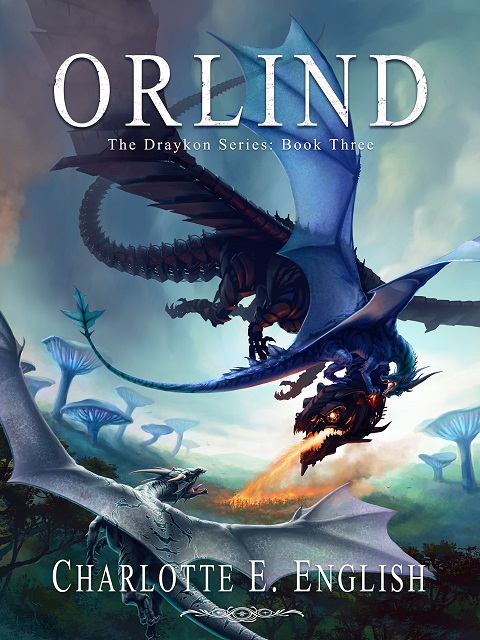 END_OF_DOCUMENT_TOKEN_TO_BE_REPLACED

Interview with Charlotte E. English, author of the Draykon Series

Today is a very special day, as I get to interview one of my favorite indie authors! Charlotte E. English is the author of the Draykon series. I have given each book in the series a 5 star rating, so you can imagine how much I like them.

I have one more treat for you. As part of the ‘Featured Author Week’, Charlotte is also appearing on two other blogs, where you can take a look at two amazing character interviews!

Here are the links to the two blogs:

Now, I can’t wait any longer, so lets get started!

Interview with Charlotte E. English, author of the Draykon Series

Describe your series? What genre would you classify it into?

The Draykon Series is high fantasy, set in a rather whimsical alternate world. It also has a strong mystery element.

Ritesh: You can find a much longer description of the series here!

How did you come up with the idea for the series?

I hardly know! It can be difficult to figure out precisely where an idea came from. I’m sure that my love of books like Alice in Wonderland

had something to do with it, though; I’ve always been fascinated by really original (and whimsical) world-building, and that’s where Draykon really started – with an idea for a weird and wonderful world.

END_OF_DOCUMENT_TOKEN_TO_BE_REPLACED

Disclaimer: If you have not read the previous two books in the series, this review is going to have some major spoilers for you.

Do you like it when a series ends perfectly? Is it not nice to know that everything that was left unanswered in the previous books is finally answered by the author and the loose ends are tied together is the most perfect of bows? Personally, I don’t like series which end with things not explained clearly, or where it is left to the readers’ imagination about what happened to the characters after the series ended.  If you like your series to finally end, and to end well, then this is the book. This is definitely the biggest reason why I am giving this book a five-star rating.

At the end of the last book in the series, we all knew that a war was coming, a war where the draykoni were going to try and lay claim to the world and fight the humans to regain control. Well, we are definitely not disappointed in that regard. The war forms one of the main story arcs in the book and it is a grand war, with everyone from humans to drakoni to the Lokants involved in it. In fact, the second big story arc in the book is about how the Lokants influence and meddle with everything that is going on. Of course, as expected Krays and Limbane end up on opposite sides of the war. I can’t tell you much more about the lokants’ influence on the whole situation without giving away the ending, but I’ll just tell you that there is a lot more going on than you can ever imagine. The war between Limbane and Krays is much more important than some petty rivalry.

END_OF_DOCUMENT_TOKEN_TO_BE_REPLACED

Lokant is the second book in the Draykon series and it is a fine sequel to the first one. I had reviewed the first book, ‘Draykon’ earlier here. As hoped for and expected, the second book continues with the story of Llandry, with all other characters making an appearance as well. There are a plethora of new characters, who add completely new dimensions to the story.

After reading the first book, I had built up in my head, a direction the story would take. I have to say that the story moved in a completely different but equally nice direction compared to what I had imagined. The book definitely moved into science fiction territory, which I love. SF and fantasy are my two favourite genres and any combination is always welcome (The SF parts are not overwhelming or unbelievable and are credible enough to go down smoothly with the reader). This book really expands the stage on which the story is played out. We find that the three conjoined worlds in the previous book are just a small part of what is really happening. This, at first seemed to me, to be an unusual twist which I could not really digest. But as the story moved forward and things became a little clearer, the roles of everyone in the story became a lot more defined and that is where the fun began.