Writing to me is … Guest Post by Karen Pokras Toz

Writing To Me Is…

…A new endeavor.  Had you asked me to finish this sentence five years ago, I might have said that writing to me was a chore. It was something that didn’t interest me one bit.  I was a reader – not a writer. But a story in my head kept nagging at me, asking to be put to paper. So, two years ago, I decided to give it a try. An amazing thing happened. I found out I enjoyed writing. In fact, I quickly became infatuated with this new activity I had discovered. Here I was, a 40 something year old woman giddy over this new passion. I wrote every day – the words flowed fast and furious, and before I knew it, I had an 85,000-word novel written. It was awful! But it didn’t matter, as I had discovered something so fulfilling, I was not about to let it escape me. So instead, I worked at improving my art. I found a writing coach, joined critique groups, and asked everyone and anyone for advice. The advice was consistent: “You have a young voice – you would make a great children’s author.”

I took this advice to heart, put aside my first manuscript, and began developing my popular character, “Nate Rocks” – 4th grader extraordinaire and star of Nate Rocks the World, and newly released, Nate Rocks the Boat.

So now when you ask me, “Writing to me is…” I answer: “proof you can accomplish anything you set your mind to.” A lesson I try to convey in the Nate Rocks Series and beyond.

ABOUT NATE ROCKS THE BOAT: 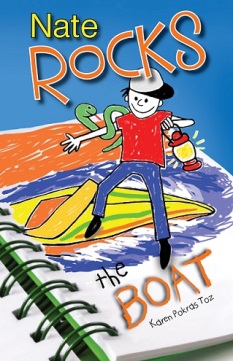 With fourth grade finally winding down, 10-year-old Nathan Rockledge is looking forward to a fun and relaxing summer at home with his friends. That is, until his mom decides he has to go to overnight camp with his annoying older sister.  When his best friend Tommy decides to tag along, Nathan thinks maybe his summer won’t actually be so bad. After all, he does get to be away from his mom’s awful cooking for an entire six weeks.

Amongst Color War competitions, a flaky counselor, and a bully named “No-Neck,” Nathan turns to his trusty sketchpad, transforming himself into Nate Rocks: 10-year-old extraordinaire. His speedboat ready for action, Nate saves the day time and again from the perils of floods, snakes, ghosts, and even the most wanted criminals.

Join Nathan, Tommy, Abby, and a whole new cast of characters as Nate Rocks once again proves nothing can hold him back in this second book of the Nate Rocks series. 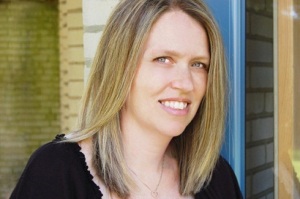 Karen Pokras Toz is a writer, wife, and mom. Karen grew up in Orange, Connecticut and currently lives outside of Philadelphia with her husband and three children. In June 2011, Karen published her first middle grade children’s novel for 7-12 year olds called Nate Rocks the World, followed in 2012 by the second book in the Nate Rocks series, Nate Rocks the Boat. Karen is a member of the Society of Children’s Book Writers & Illustrators (SCBWI).

You can find Karen here: