Nicole’s Books – An introduction to the Grimsley Hollow Series

This post is part of ‘Nicole Storey as featured author for an entire week’. During the week we will be having a number of posts by Nicole. You can find the details here. There will also be a giveaway happening for 3 copies of Nicole Storey’s novel ‘The Chosen One’, which is the first book in the Grimsley Hollow Series series. You can enter the giveaway  here.

An introduction to the Grimsley Hollow Series

I find it hard to describe my own writing.  If I had to choose a genre – a “box” that my book would fit into – I would say that it is a middle-grade fantasy book with a touch of paranormal and a lot of Halloween!  LOL!  However, as many writers will tell you, we all have trouble making our books fit into one or two specific genres.  Most books can be described in many ways – depending on how the reader interprets it.

Grimsley Hollow-The Chosen One is about an eleven-year-old autistic boy named Gage.  He has no friends and he loves Halloween.  I based the main character on my own son, Gage, who also has autism.  In the story, Gage meets a young witch named Eve, and his life is changed forever.  Eve lives in another realm called Grimsley Hollow, and her world is being threatened by an evil witch named Inari, who is trying to take over.  Gage is the only one who can help.  In his adventure, he makes some magical friends, which includes an ornery pixy named Puck, a half vampire-half fairy named Ladon, and a werewolf named Siren.  Gage also learns that he has magical powers and that “autism” is just a word and not a definition of who is really is.

I started playing around with this story several years ago when my son was eleven.  He had just started middle-school, and was having a rough time of it.  At first, I decided to put him as the main character of my book for two reasons: one, it would be something to boost his spirits and two, I was sick of reading books with autistic children (and special-needs kids in general) where they are portrayed as idiot savants with no feelings.

I never intended to publish my work.  It wasn’t until February of 2010 that I decided that I would try.  I also had another purpose for wanting to get my book into the hands of children all over the world.  I had a message to send to them.  By this time, my son was in his second year of middle school and he had been bullied, called horrible names, and kicked to the curb like trash.  I wanted to write a book to show other kids that special-needs children are not so very different from them.  They want the same things – to have friends and to be accepted for who they are.  I figured if parents didn’t find this topic important enough to talk about with their children, and if other books wouldn’t show these amazing kids in the light that they deserve, I would.

I started completely from scratch with my manuscript.  I told the truth, and tried to show how it really is for my autistic son.  I decided to write a fantasy to make it more appealing for kids to read.  I published it in September of 2010.  In November of 2010, I submitted my work to Inknbeans Press.  When I was accepted into their family, I was told they wanted to help me spread my message to others and this was the first time that someone else understood my reason for writing the book and how important it is to me.

I won’t say that the thought of becoming a famous author with a little money in my pocket is not appealing.  However, that is not my main goal for this book or the others to follow in this series.  The message I am trying to spread is more important to me than all the money in the world.  This book is dedicated to all children who suffer from disabilities.  I hope it inspires everyone, especially other kids, to reach out and include these wonderful children in their lives. Together, we can make this happen.  After all, not every super hero wears a cape!

Ritesh: I know autism is a very special illness. Besides  this, there are a lot of other special needs children out there. And, this is what this story is also about. These children have the same wishes that we do, to be accepted for who they are, for someone to be their friend, and for people to understand them and not simply reject them based on the autism.

So here’s my question to you dear reader. Have you ever interacted  with an autistic or special needs child? What has been your impression? Would you  be friends with them? Think and answer truthfully!

Nicole Storey is the author of Grimsley Hollow-The Chosen One.  Her book can be found in e-book and paper back forms on Amazon, Barnes and Noble, Smashwords, Apple iStore, Sony, and other online website that sell books. 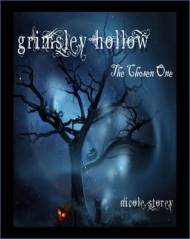 The Chose One (Grimsley Hollow Series)

Gage Gilbert is an eleven-year-old boy who just happens to have autism, loves Halloween, and has no friends. Although he has always been happy with the safety and security of his family, he longs for a real friend and adventure, not just the ones he makes up in his head. And then he meets Eve.
Eve is a young witch and is from another world called Grimsley Hollow. It’s where all magical beings live in safety and peace, but their world is in trouble and Gage is the only one who can help save them from an evil witch who has taken control.
With Eve’s help (along with a sarcastic pixy, a trouble-making werewolf, and a half-vampire), Gage travels to Grimsley Hollow and together, they begin a journey that will change them all. It’s a dangerous race against evil, where creatures unheard of stalk the land under a harvest moon and monsters that only exist in dreams become real.
Gage wanted friends and adventure, but he had no idea that they would come at such a dangerous price. Can one autistic boy defeat an evil witch and help save his new friends? Travel to Grimsley Hollow and find out!