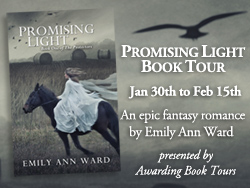 As part of the ‘Promising Light’ blog tour, I have with me today, author Emily Ann Ward. She was gracious enough to answer some of my questions. What follows is an extremely interesting interview.

To know more about the blog tour and to visit all the participating blogs, you can go here. I am also hosting a giveaway of TWO paperback copies of Promising Light. This open for US ONLY. You can go HERE to enter. 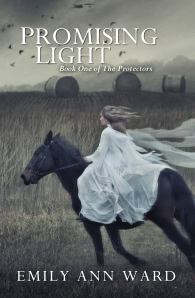 Grace began a secret courtship with Dar for the thrill of doing something against her father, the king’s general. She hadn’t planned on falling in love with him. When Dar suddenly leaves her, she searches for answers, reluctant to let him go.

Everyone seems determined to keep the truth from her—until she’s kidnapped by Dar’s family. They’re shape changers who claim she can break a curse set on them ten years ago by the Protectors, a group of noblemen determined to stifle magic in the name of safety.

Torn between two worlds, Grace isn’t sure who to trust. If the curse endures, Dar’s family could die out forever. But to help them, she’ll have to leave behind everything she knows.

Describe your books? What genre would you classify them in?

Promising Light is the first in a fantasy series, The Protectors. Grace is a young noble in a secret relationship with Dar, and when he suddenly leaves, she searches for answers to his mysteries. Weeks later, she’s kidnapped by his family, shape changers who claim she can break a curse set on them years ago. Will she choose to help Dar’s family or will she support the noblemen who think they are doing good by stifling magic?

The series deals with the struggle between the shape changers (also called Avialies) and the Protectors, noblemen who think they are doing the world good. The prequel novellas are about the beginning of the curse and the Protectors’ growing political power, but the tides change in Promising Light and its sequels.

My short stories tend to be contemporary: ordinary people dealing with relationships, love, family, things like that. Passages is a collection of seven young adult stories, and Beyond Home is three short stories for adults, though young adult would probably enjoy them, too. I have a short story in Love, Me, an anthology that will be published February 1st. It’s a romance story between two characters in Promising Light.

My longer works are fantasy and scifi-driven. I love the fantastical and speculative! Finding Fiona is a YA scifi novella about a girl who loses her memory and fears she may be a human replication. Promising Light is the first in The Protectors series about a young girl named Grace who is trying to decide who to help: the shape changers who are cursed or the noblemen who are trying to protect the world from magic.