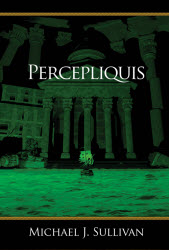 I’ve done a plethora of guest blogs recently. Some hosts have asked me to comment on a specific topic, others have selected from a list that Robin came up with. For this post Ritesh asked what I would like to write about…a dangerous and daring move. Free of constraints there’s no telling what I might say. Let’s face it, there is only one reason Ritesh has devoted a whole week showcasing me: I wrote a book that is about to debut, but this isn’t just any book—this is the final, never before published, conclusion to a long epic fantasy series. That in itself is grounds for astonished celebration—a long fantasy series with an end!? What won’t they think of next?

Now just to clear up some confusion, the book I am speaking of is Percepliquis (stupid name for a book, and I would agree, unless you’ve read the others, then not so much), and maybe that’s the point. I don’t want people picking it up and reading it first, ah…but then there is another book as well…Heir of Novron which will debut just a few weeks later. Some people have been puzzled about which book is the next in the series, Percepliquis or Heir of Novron. Technically, they both are. Percepliquis is really only for people who have read all five books in their original six book format. Heir of Novron is the last of the Orbit published trilogy and is comprised of both, book number five, Wintertide and the last book Percepliquis.

Why is this? Because there are people who, for the last two years, have dutifully followed my original books and have an incomplete set of novels which I created cover art for. They begged for the chance to obtain that final volume for their set, and Orbit—believe it or not—that massive, faceless, heartless, corporate monster that publishers are supposed to be, agreed (which makes you wonder just how terrible and self-serving a New York publisher really is). So Percepliquis—the very green book with the stupid name (unless you’ve read the others) — is for those who have … well, read the others. To further confuse you…the printed book will be put out by my wife’s company Ridan, and the ebook will come from Orbit. If you want to buy a signed dead tree version you can order it from my site. One funny thing I should point out (or maybe you won’t find it so funny) is Percepliquis in print form from me as a standalone will actually be more expensive than the Orbit book that also includes Wintertide. No, I’m not trying to rake anyone over the coals for the last one. In fact I’m making less per book than I have on my others. The problem is that Percepliquis is more than 600 pages and that is costly to produce with print on demand. So if you are watching your pennies and still want to read the last book…buy Heir of Novron (it’s about $10 from discounted sites online from places like Amazon and Barnes and Noble) and just ignore the Wintertide part.

Anyway, now that I’ve confused you with the whys and wherefores, let’s get back to what you are probably more interested in — the book itself. So the trick here is to discuss the last book in an epic series without ruining it for those who have yet to start and still feed the curiosity of those who have. Sure…no problem…okay, here goes.

I wrote Percepliquis between September 2nd 2007 and April 23rd 2008. All the secrets of the last five books could finally be told, and there’s a lot that had to be revealed.  Yes, the fact that these are the Riyria Revelations was intentional. As a result the book became merely a matter of tying up all the threads I had woven. I had a list, a long list, and I was careful not to leave anything out. As a result, this book wrote itself. Every chapter turned out to have something great in it because each chapter finished off something of importance. I never had an easier time writing.

When I got to the end, I had a good book. I was happy with how it came out…but it wasn’t “the best thing ever.” Like Jack Nicholson in As Good As it Gets after he kisses Helen Hunt for the first time, I knew I could do better. The planned ending had been ruined by characters refusal to do as they were told. Certain characters, who I will not embarrass here by mentioning their names, refused to become evil, and others refused to remain good. This, as you can imagine, trashed my outline. The result is that the conclusion, while satisfying, wasn’t all that I wanted it to be. Then, while I was waiting in my car in a torrential downpour to pickup my daughter from her work, the new ending came to me. It was a true flash of inspiration, and I was so excited that I almost left without her. I had actually already subconsciously put all the pieces into place, and it would take just a few minor modifications (thank God I waited to publish until the last book was done) to take the series to a whole new level. When I finished the last sentence and pushed away from the keyboard, I was stunned. Wow, I thought, now that’s good! Yes, I know, authors are supposed to be humble and self-deprecating when it comes to their writing…readers don’t like those with inflated egos, and in general I’m more than willing to recognize my faults and flaws. But even objectively I’m impressed with how the book finally came out. Even if no one else ever thinks it’s any good—I know it was worthy of the time I spent on it.

That was four years ago.

The thing about this series is that it isn’t like others that I have read. Most are just an ongoing tale about a trip that a hero takes, but this series has complexities hidden in plain sight. The books all appear to be simple stories designed to entertain readers, and hopefully they are. But beyond that I attempted to surprise people along the way. I fully admit my desire to mislead my audience—particularly the most experienced, self-assured, fantasy vets who believe they’ve seen everything and can always guess what will happen. In many ways they are the easiest to fool, because I can use their own expectations against them.  They have been so often disappointed by lazy writing that they expect it now. Make the slightest suggestion that the-butler-did-it, and they will sigh, roll their eyes, and swallow the hook far more readily, because for them it has become routine.

The Riyria Revelations began with a simple story. The Crown Conspiracy was designed to be a doorway wide enough for everyone to enter. Hardcore fantasy readers may find it typical… nothing new…but my hope is they will be entertained enough by the smart humor (something they don’t often see) to continue on further. The newer fantasy readers, or those who don’t care for thick heavy books, should find it easy to understand, easy to be sucked into. Those who don’t like fantasy at all, will find the modern dialog, apparent lack of world building, and the scarcity of high fantasy elements (like abundant magic) accessible and not too “fantasyish.”  It makes for a good introduction book that fantasy fans can coax their non-fantasy reading friends into.

Adults will find the themes mature enough (this isn’t YA), but the lack of profanity and graphic violence will provide a safe place for their kids to enter as well. I’ve heard from many parents that the whole family is reading and discussing the books together…how cool is that?

Still, Crown was a simple story—nothing deep, nothing thought-provoking, nothing hard to follow. It is meant to be just plain fun. Crown was the tease, the lure, but for those who kept reading, they’ll discover that the deeper they go, the more surprising the story will become. Along the way there will be unexpected twists. Few things are as they first appeared, and soon, even the fantasy vets should themselves standing in a minefield of the unexpected before they ever knew what had happened.  But all that occurs in books two through five and in fact the fifth book wraps up many plot elements in a nice little package…but everything that came before was really just the foundation for the conclusion.

I already mentioned that the last book is large—about  twice as long as any of the other books. Even Orbit mentioned that too much happens in the final book and they wanted to spread things out more.  While I could see my editor’s point, the fact is there is this great mystery—this revelation—that can’t be exposed until the last book and until it is unlocked everything else has to remain hidden. Those who have read Wintertide and wonder how I’ll be able to tie up everything remaining don’t know the half of it.

The good news is that with so much to include, there’s no room for bloat, which is so common in other ending volumes. Every scene was a blast to write, and I always felt that if a writer is having a good time writing, the reader will have a good time reading.

But the amazing thing is that this last book manages to transform all the books that precede it. For those that reread the series after Percepliquis is over, they should notice a series of hidden threads that are now illuminated. Things that they might have previously perceived as trite or contrived will now be shown in a new light. After reaching the end of Percepliquis you realize that the books actually do have a message that transcends just sheer entertainment. It has always been there, and some have felt its presence but never managed to define exactly what it was. In the end, when you close Percepliquis, I hope you will understand. I hope it will be the flood that raises all the boats. I hope you will agree it was worth the trip and that Percepliquis is the best of the series, and that the series as a whole was worth your time and money.

I spent decades conceiving the story, years writing it, more years editing, and still more trying to let people know it exists. I’ve done all I can. Now it’s up to you to decide: thumbs up or thumbs down. At this point I’m the gladiator standing on the bloody field of battle (also known as being an author in an ever changing publishing climate) I’m deafened by the shouts of the crowd as I await the final decision on my fate.

The wait is finally over! Percepliquis and Heir of Novron have been finally released and you can the books here!

This is the last post by Michael in the ‘Michael J. Sullivan as featured author’ week. We still have the giveaway of ‘Theft of Swords’ running for another 3 days. So, anyone who has not entered yet can do so here. Also, there is a surprise ‘special treat’ tomorrow for all the fans. So come back here to find out. If you have missed out on something this week, here’s a recap:

Finally, I’d like to thank Michael and Robin Sullivan for helping me put this week together. It is really special for us fans to be able to interact with authors like this and I am extremely grateful for it.

2 responses to “Percepliquis: The series concludes by Michael J Sullivan”