The Ones That Got Away

Most authors have them. They stay hidden in drawers or in long forgotten computer files. I’m talking about the stories and books that have never been finished or weren’t deemed good enough to see the light of day. I have my fair share of them—mostly short stories or early chapters of books I abandoned. I have many reasons for the abandonment, sometimes I just couldn’t get into the story, or it seemed too much like something else I had written, other times they were great but I wanted to focus on a different story.

But what happens to these stories when you can’t completely let them go? I admit that occasionally I find myself scavenging them for a setting or a fantastic character, or even using them to create a whole new story idea. Am I the only one?

Alyssa Rose Ivy lives in North Carolina with her husband and two young children.  Although raised in the New York area, she fell in love with the South after moving to the region for college.  After ending her years as a perpetual student (College, Law School, and Masters in Library Science), she turned back to her creative side and decided to write.

Alyssa can be reached here: 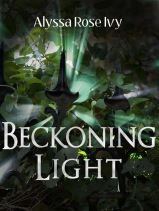 As Charlotte steps through the gate, she has a strong feeling that nothing will ever be the same again.

Moving back to South Carolina after three years away, Charlotte knows she’s going to have to face people from her past and adjust to a new high school, but she’s completely unprepared for what else waits for her in Charleston.

Drawn through an old garden gate, Charlotte discovers a hidden world where she meets Calvin, a boy to whom she is inexplicably attracted. As Charlotte is pulled deeper into this hidden world, it’s up to her older brother Kevin to rescue her. No matter how hard Kevin tries, the rescue depends upon Charlotte fighting her intense feelings for Calvin while mastering a set of abilities that she has only just discovered she possesses.